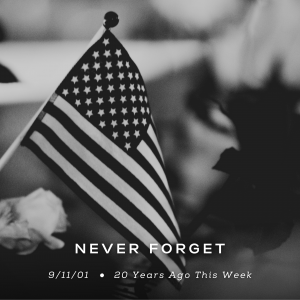 “Most Americans remember where they were when they first got word that a plane had crashed into one of the Twin Towers in New York City. I was working in the woods well out of cell phone range and miles away from the closest television when my boss called me on the radio to say that a plane had hit a building in New York City. An hour later, he called to report that a second plane had hit a building. Soon after, we learned that it was an act of terrorism. To be honest, it was hard to wrap your head around at that moment; it didn’t seem like this could be real. It wasn’t until I saw the striking images of passenger planes colliding with the Twin Towers when the enormity of this tragedy hit me and I knew nothing would ever be the same. In the two decades that have followed the attacks, those emotions ring true today.

“On the 20th Anniversary of these terrorist attacks, we must remember the men and women who lost their lives in these horrific attacks and keep their loved ones in our thoughts. Although the attacks forever changed the lives of every American, the family members and loved ones of those who died saw their world shatter in more ways than one and then had to share that grief with an entire nation.

“We must also honor the extraordinary men and women, who saw something unimaginable – a plane smash into one of the tallest buildings in the world – and responded by running full speed towards the crash, not knowing what they would find but with the sole mission of saving lives. It’s hard to put into words the heroism Americans witnessed that day. In the wake of unspeakable tragedy, firefighters and first responders showed up for this country with many making the ultimate sacrifice. The best way to honor their memories and express our gratitude is to ensure the first responders and survivors, who suffered physical and emotional trauma, continue getting the care they’re owed.

“As we remember this fateful day in our nation’s history, let’s hold our loved ones a little tighter, look out for our neighbors, take care of our communities and find strength in each other. After all, it’s all we have and that’s what’s important.”